Why we march against Monsanto 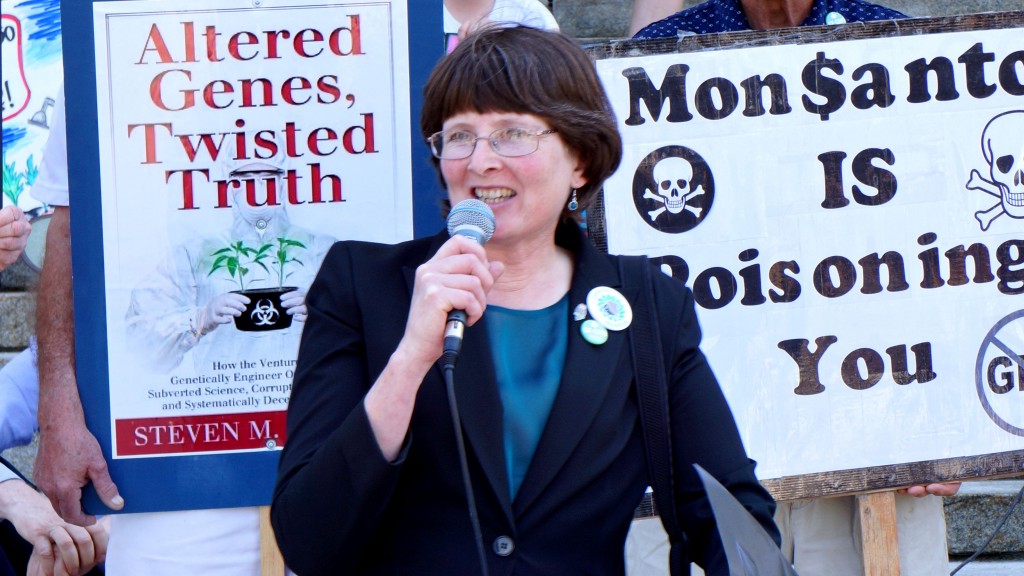 Winnipeg, May 23, 2015 – Kate Storey, the Green Party of Canada’s candidate in Dauphin-Swan River-Neepawa, spoke at the March Against Monsanto that began in front of the Manitoba Legislature. The Winnipeg march was one of many; marches were held on 6 continents, in 48 countries, involving thousands of citizens in 421 cities. Photo: Paul S. Graham

There is no reason to have genetically modified food. GMOs do not produce more. GMOs do not have any trait we need. Genetic engineering only exists so that one company, called Monsanto, can change food enough to put a patent on it.

Those patents give Monsanto a very big share of industrial farming. Monsanto has a 90% monopoly on genetically engineered patents. It makes Glyphosate , which is the worlds most used and most abused farm chemical.

The United Nations recently released a report called Agro-ecology and the Right to Food. That report says that industrial agriculture with its pesticides and genetic engineering is actually the cause of most world hunger.

The UN report concludes that “not only would industrial food production not be able to feed the world in the long term, but the practices being employed are actually increasing hunger, exhausting resources and exacerbating climate change.”

Thirty years ago, farmers started using more fertilizer and learning new techniques and the crop yields started to rise. Genetic engineering was introduced at the same time but the genetic engineering has nothing to do with the increase in yields. All crops including non GMO and Organic can have the same boost in yield. It is the farming technique and not the engineered trait which creates the yield increase.

GMOs can’t feed the world. We do not need to engineer seed.

Genetic engineering can never feed the world because GMO crops have a fatal flaw. Engineered crops cannot withstand pests or disease. The engineering forces the plant to take energy away from growing and put it toward the novelty trait. This means that the farmer has to apply chemicals to keep the crop alive. GMO crops can never feed the world because they are too weak and too dependent on chemicals. And I have not even mentioned what those chemicals are doing to our kids and to the water.

It’s time to get Monsanto out of our food.

There is nothing that genetic engineering can do that regular crops cannot do just as well or better. GMO is simply a business plan to get farmers addicted to chemicals. And like any addict, some will fight to keep the addiction.

You have to admit that from Monsanto’s perspective, genetic engineering is the perfect business plan. First they use propaganda to hook farmers. They patent the seed and charge royalties. They monopolize the market making sure that farmers have to choose GMO seed. The monopoly allows them to sell that GMO seed at a high cost. Seed used to cost $6 dollars a bag. Now it costs $600. Then they sell all the chemicals to keep that crop alive. The soil is damaged, requiring even more chemical and so the profit cycle continues.

A lot of farmers are getting worried about all the chemical and all that cost but they are trapped in the cycle. Farmers can enter GMO farming any time they like, but they can never leave.

It doesn’t have to be this way.

There are non-GMO seeds which grow very well. An organic field can get high yields without GMO and without any chemical at all. We do not need genetic engineering.

GMO – Get Monsanto Out

We are marching against Monsanto today but this march is only one day. Monsanto propaganda works every day. They spend billions of dollars on propaganda to convince farmers to fall into the GMO trap.

I’ll tell you about the propaganda. Every morning my radio alarm clock goes on and I wake up to the sound of a pesticide commercial. It tells me that if I want to be a good farmer I have to spray my fields.

Then I open up the farm paper and it’s filled with big glossy advertisements with words like kill and pictures of pretty girls with big machine guns aimed at a plant. I read the articles and it tells me that if I am any kind of a farmer at all I have to buy their chemical and spray it on my crop. It’s embarrassing really. Those ads are like a drug dealer pushing chemical on an addict.

Then there are the articles telling me that we farmers have to use those chemicals so we can feed the world. Apparently I am a bad farmer because I don’t use their chemicals and their engineered seed.

Science and common sense tell us that we do not need the chemicals or the engineered seed, but many farmers do not hear the science. The propaganda is all they hear every day.

GMO proponents like to tell us about all the wonderful new traits that genetic engineering could give us. This is also misleading. Engineering changes one gene at a time and this gives us boutique traits which are pretty but come with a chemical addiction.

That golden rice is a good example. The poor people of India used to grow vegetables to eat with their rice. Industry forced the people off their farms and now they have no vegetables. Industrial farming gave them golden rice to hide the fact that industry stole their land. Golden rice is nothing but a cover-up.

We do not need genetic engineering. GMO – Get Monsanto Out.

We’re marching against Monsanto today, but what happens tomorrow? That’s where you come in. You can make a difference today, tomorrow and every day. You can fight Monsanto with your food dollars.

Get Monsanto out of your food at the grocery store. Buy local. Buy organic. Demand pesticide free food.

You are the answer. GMO – Get Monsanto out.

GMO – Get Monsanto Out

Here are all of the speakers, including Kate.