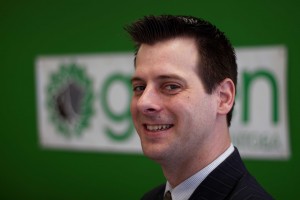 The Winnipeg General Strike of 1919 was a monumental moment in the history of the labour movement in Canada, and the world over.

On May 1, 1919, Winnipeg’s building and metal workers went on strike for higher wages and better working conditions. Employers simply refused to negotiate with the metal and building trades councils. Two weeks later the Winnipeg Trades and Labour Council appealed for a general strike in support of the metal workers. The response was overwhelming. Approximately 30,000 union and non-union workers had walked off the job by 11 a.m. on May 15, 1919. Railway shops and yards, factories, mail, streetcars, taxis, newspapers, telegrams, telephones, gasoline delivery, milk delivery, police and fire-fighting services were all shut down. Solidarity strikes sprang up in several dozen other Canadian cities and towns across the country. The Winnipeg General Strike would last six weeks until it was finally brought to an end by the tragic events of Bloody Saturday on June 21, 2019, which resulted in 2 deaths and approximately 40 injuries.

It is important to recognize that the right to unionize and to collectively bargain was generally not recognized a century ago. At the time, Winnipeg was known as “Injunction City” because of the frequency with which local courts granted employers injunctions against strikes and picketing. Several of the strike leaders were arrested, charged, and convicted of a conspiracy to overthrow the government and sentenced to jail terms ranging from 6 months to 2 years in the aftermath of the General Strike.

We have come a long way over the past 100 years. In 2007, the Supreme Court of Canada confirmed that the right to collectively bargain was a constitutional right protected by the Canadian Charter of Rights and Freedoms in the decision Health Services and Support – Facilities Subsector Bargaining Assn. v. British Columbia. At the same time, however, we have to be careful not to be complacent. People literally died and/or were imprisoned for the right to unionize.  We can never take these hard-fought rights for granted or we risk losing them.

Another element of the Winnipeg General Strike that often gets overlooked is that many small business owners also shut down their restaurants, retail stores, barber shops, and other businesses in solidarity with the striking workers. Too often labour relations are framed as confrontations between business owners and employees. While this may be the case sometimes (particularly with larger, more powerful business interests), the Winnipeg General Strike demonstrates the opposite can be true as well. Many small business owners have more in common with unionized workers than they do with large multinational corporate interests. The interests of the powerful are often served by inciting anger over differences and downplaying commonalities of a shared plight as a means of undermining union organizing and other activist activities. Greens do politics differently and we recognize that social change is most effective when we bring people together.

The Green Party of Manitoba recognizes that the right to unionize and collectively bargain is a fundamental human right that helps to equalize the power imbalance that exists between employers and employees. If elected, we would actively promote and encourage unionization (even the previous NDP government took a “neutral” stance with respect to government promotion of unionization in the workplace). We would also amend legislation so that the Manitoba Human Rights Commission, which has a broader mandate and broader authorities than the Manitoba Labour Board, would deal with labour discrimination complaints. The Green Party of Manitoba also supports equal treatment for farm labourers, a 35-hour work week, a living wage based upon the Market Basket Measure (MBM) threshold of poverty, and a Guaranteed Annual Income Supplement that would cut poverty rates in half.

There are numerous events taking place to celebrate the 100th Anniversary of the Winnipeg General Strike, so make sure you check them out.