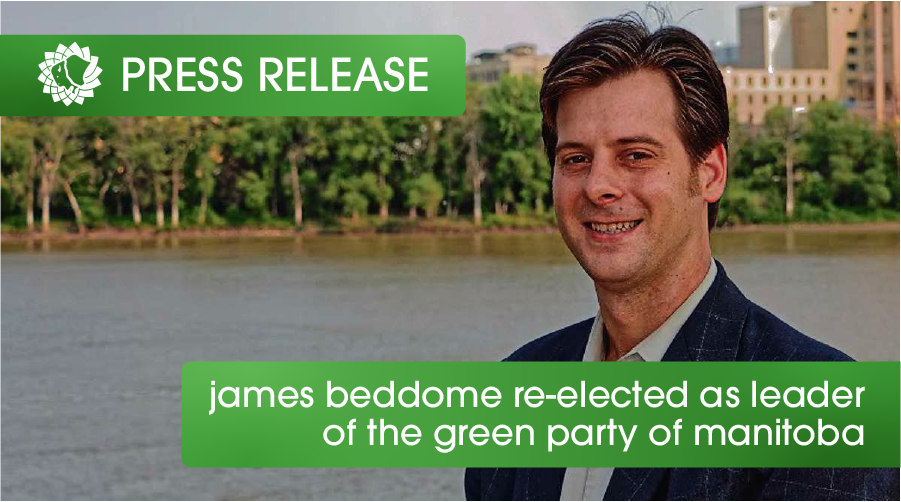 28 NOVEMBER 2020 | WINNIPEG, MB: The Green Party of Manitoba Announced at its Annual General Meeting today that James Beddome has been re-elected as the GPM’s leader and is set to continue his 12-year stint in the position for at least another two-year term.

Beddome defeated challenger and current deputy-leader Andrea Shalay 70 votes to 56, with 3 votes for “none-of-the-above,” and 2 abstentions. The turnout from the Party’s 182 eligible voting members was 72%.

“I want to thank the membership for continuing to place their trust in me. I also want to thank my campaign team for their support, and my competitor Andrea Shalay for throwing her hat into the race and pushing me to be a better leader,” said Beddome after learning of the results.

“I know James Beddome will continue to pour hard work, dedication and energy into his role as leader. It was an honour to run against him, and I look forward to continuing to work with him,” said Shalay.

“The membership has re-elected James as leader of our party and I congratulate him and look forward to working with him over the next two years. This election saw a record voter turnout of 72 percent. This was the first election using an online voting software and it was clearly a success,“ Commented David Nickarz, GPM president who was also re-elected at the AGM.

“As promised, my main focus will be on continuing to impact politics in Manitoba, growing the membership, and ultimately electing Greens,” said Beddome.